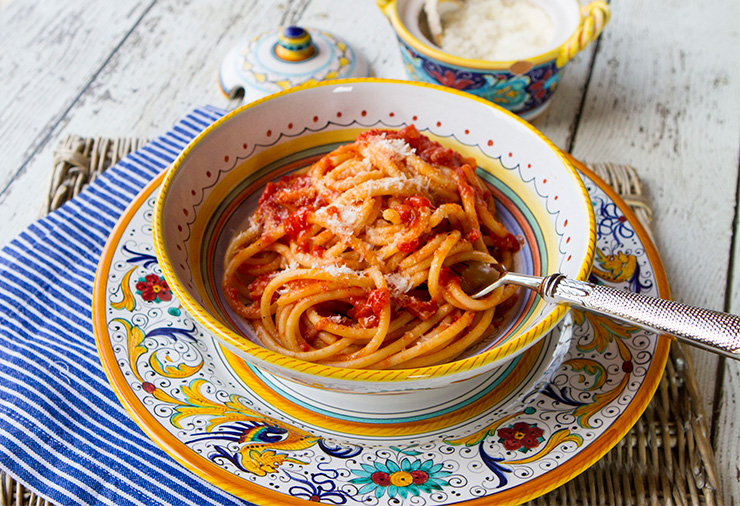 Central Italy was devastated by an earthquake that hit August 24th during the early hours of the morning. This 6.2 magnitude earthquake and its many aftershocks decimated the three medieval towns of Amatrica, Arquata del Tronto, & Accumoli. Sadly, they no longer exist. At this time of this writing, 291 are confirmed dead, with 231 in Amatrice alone. Hundreds more were hospitalized, and more than 2,900 are now homeless. What hit us hardest was just how close this earthquake was to our property here in central Umbria, just one hundred and forty kilometers, or a mere two-hour drive away from where this latest earthquake did the most damage. I was awakened at 3:36 by my dog growling and barking, and once awake I felt my bed shaking and heard things in my closet rattling. Not ever having experienced anything like this before, I thought my husband had gotten up and was being too noisy and I told him to go back to bed. I rolled over and went back to sleep. Never did I imagine the devastation that was happening just two hours away! Once we realized the next morning what happened overnight, we were glued to the television over the next few days trying to see what happened and if there was anything we could do to help. 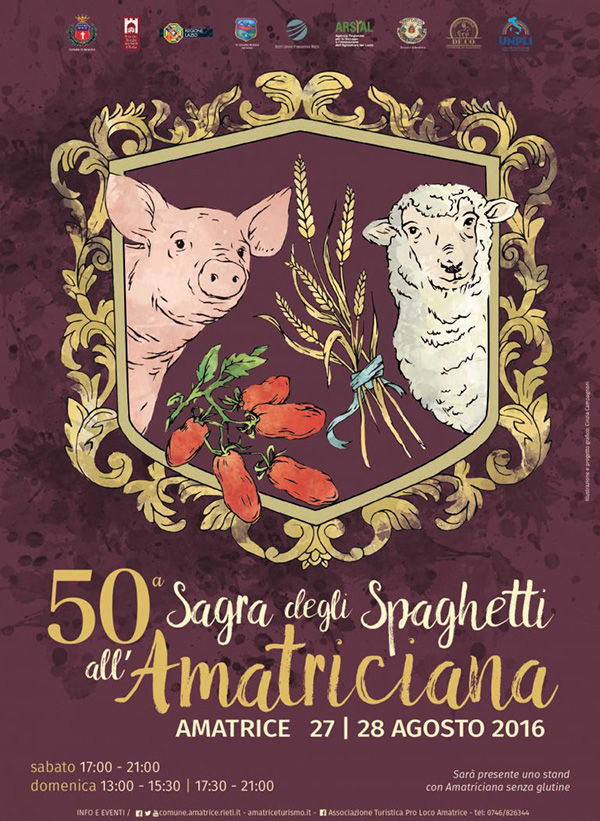 What is truly sad, is that this past weekend, just a few days after the earthquake hit, the town of Amatrice was to celebrate their 50th annual Festa dell”Amatriciana. The town of Amatrice takes claim for creating this iconic pasta sauce, although there are some who disagree (mainly Roman chefs), and had planned a festival to celebrate. Food festivals in Italy take place every weekend in every region across the country, primarily throughout the summer months and involve local food specialties, live music, and dancing. These sagras are a beloved tradition for folks to enjoy the company of good friends and family and to celebrate local food and wine specialties. To celebrate the Festa dell”Amatriciana and to help the earthquake victims, restaurants across Italy, North America and beyond, are donating proceeds of any dishes of Amatriciana sold. The food community is also hosting a virtual sagra, to honor the earthquake victims and to celebrate this traditional pasta dish beloved worldwide. Instead of dining out, you can also make this recipe at home and simply send in your own donation using the links below. If you want to share your Amatriciana pasta and join in the virtual sagra, take a photo of your prepared dish, post it on social media, and then use the hashtag #VirtualSagra in your description.

Like many traditional pasta dishes, there is an ongoing debate on exactly what ingredients should be utilized in creating a “true” Pasta all’Amatriciana. The one ingredient everyone agrees on is that guanciale, (cured, unsmoked pork jowls) are used. If guanciale is not available, many folks use pancetta in its place, but bacon should never be used. Luckily I can buy guanciale just about everywhere here in Italy, although it isn’t as available in North America. One source that I recommend is Nduja Artisans. I buy my Nduja from them, and last year they started selling guanciale as well, and it is very similar to the guanciale I buy in Italy. 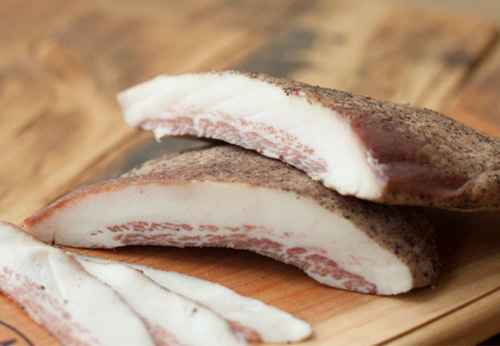 Other ingredients that folks debate about are if onions and garlic are included. Purists feel that a real amatriciana pasta includes only guanciale, tomatoes, chili pepper or black pepper, Pecorino cheese and pasta. It is interesting to note the the early version of Amatriciana, now called Amatriciana Bianca, or Pasta all Grica was made without tomatoes. The version the town of Amatrice states is the original recipe uses spaghetti as the pasta of choice while in Rome, bucatini pasta is more commonly used. Guanciale is very fatty, so I find that no other oil is needed, but some recipes call for lard in place of oil. I like to use a splash of dry white wine after my guanciale has been browned, but that is another ingredient that is often frowned upon by purists. This is considered a quick cooked pan sauce, one that can be prepared quickly, and the cooked, drained “al dente” pasta is finished in the pot with the sauce to allow the pasta to absorb as much of the sauce as possible. When onions and garlic are included in the recipe, the sauce is usually simmered much longer to allow the sweetness of the onions to develop in the sauce. This sauce is simple, delicious and can be thrown together in under thirty minutes. It is certainly one dish any pasta lover should have in their repertoire, but like most simple dishes, it is best if you use top quality ingredients.

If you can help, please do so, as the folks in this region need everyone’s help at this time and no donation is too small. Almost 3,000 folks have lost everything and are presently living in tents. It is going to start getting much cooler up in the mountains very soon and these folks can use all the help we can give. Please dine out at a participating restaurant, or give something by following the links below.

You can also donate directly to the Red Cross through PayPal which is what we found was the easiest way to help.

The Italian American Relief Fund is also accepting donations to help out the victims of this recent earthquake.

You can find eight other ways to donate Here! 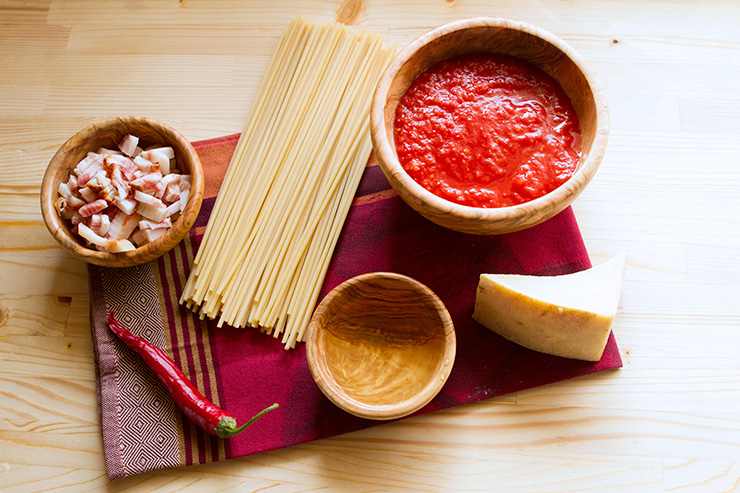 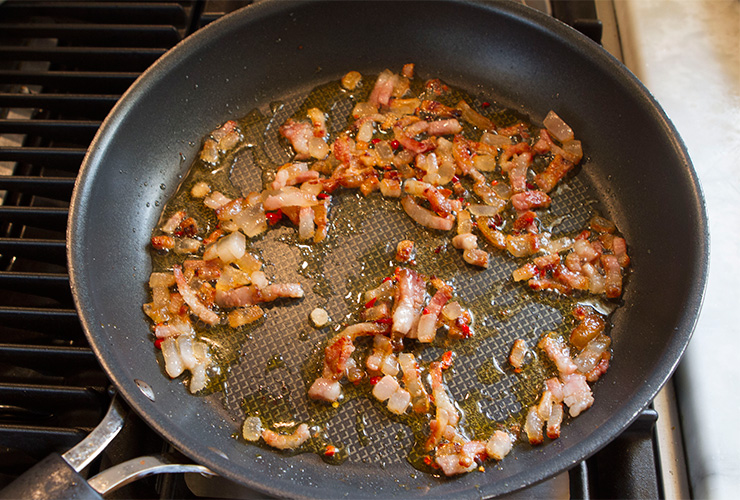 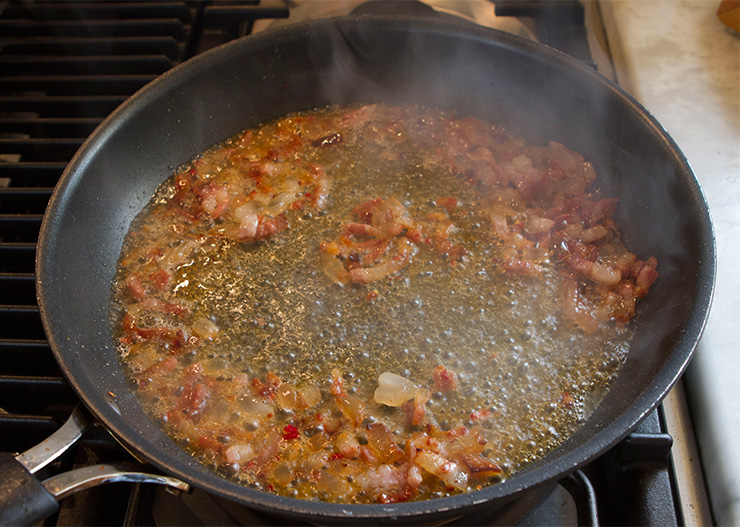 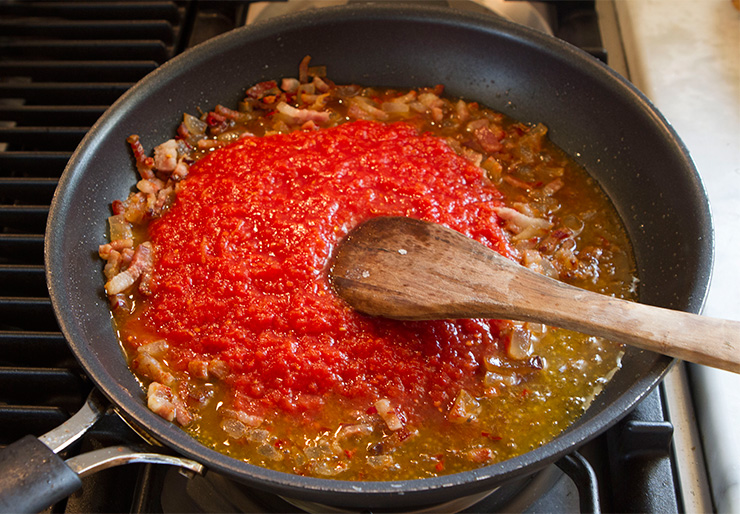 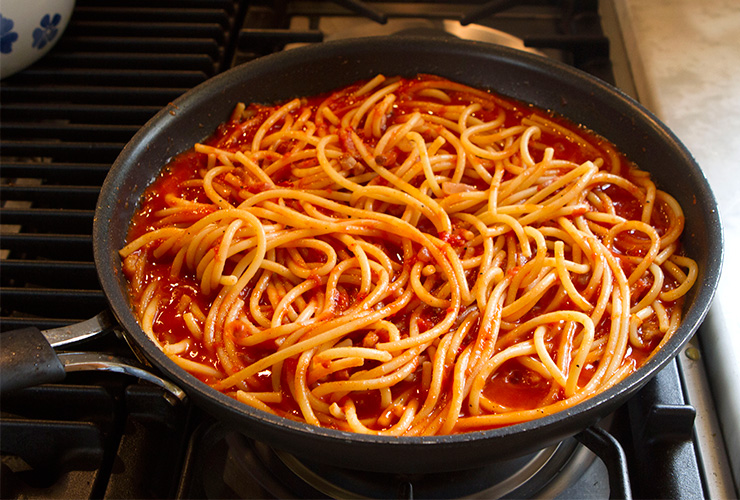 Adding the almost cooked pasta to the sauce. 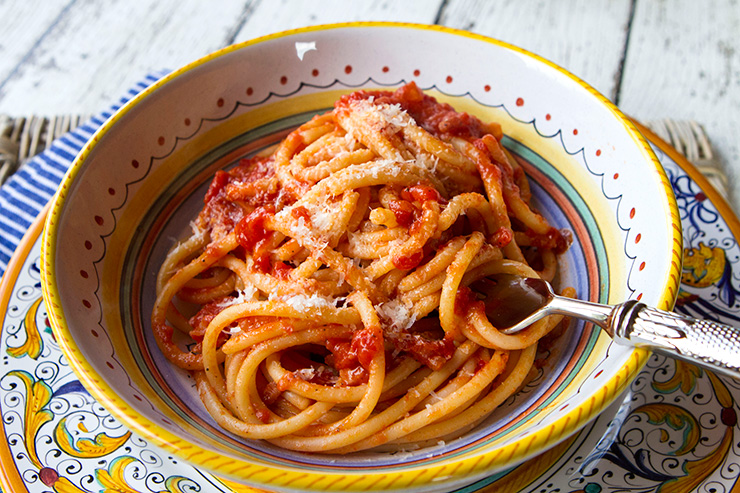 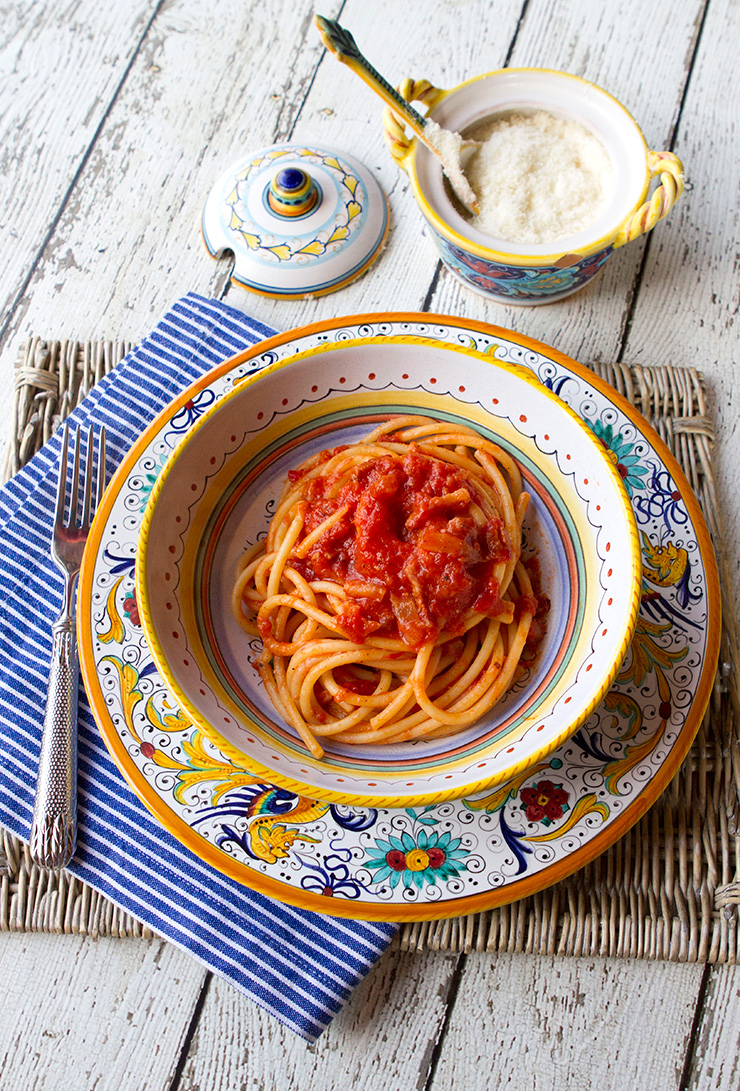 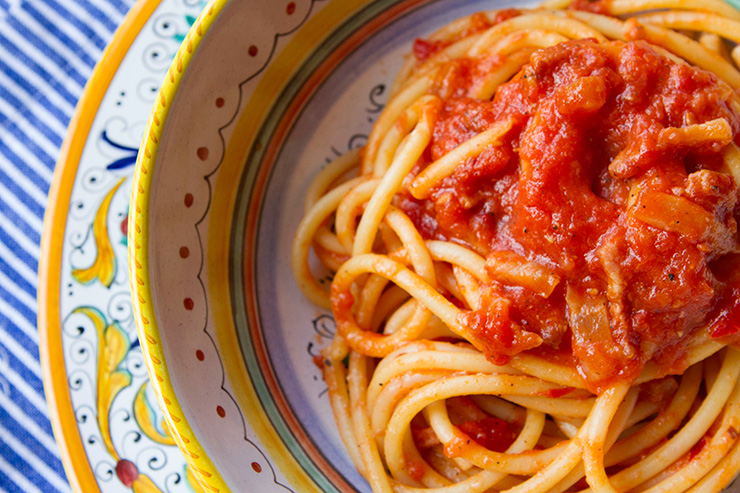 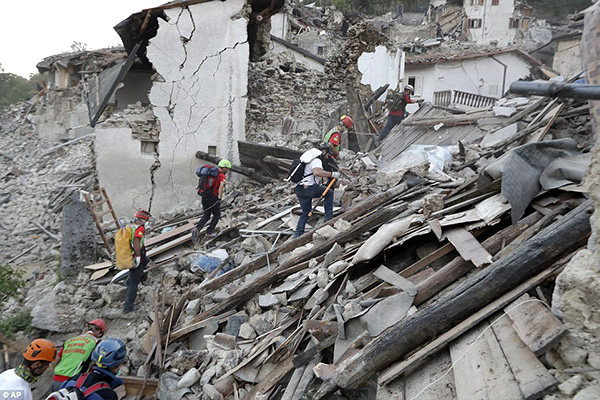 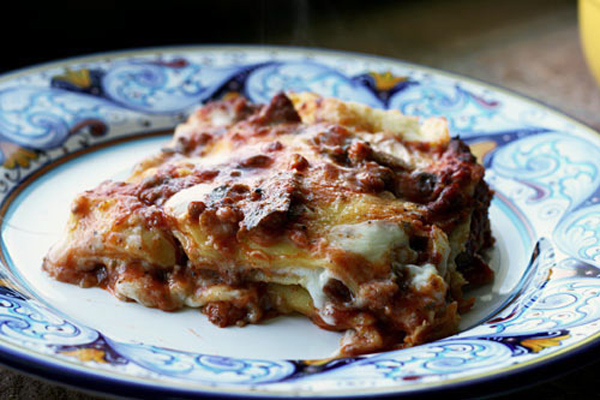 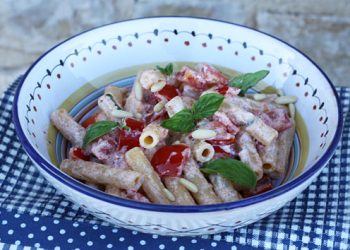 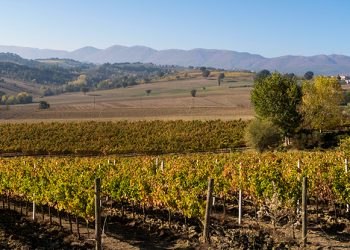 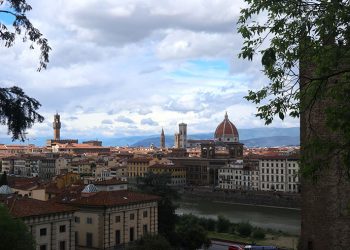