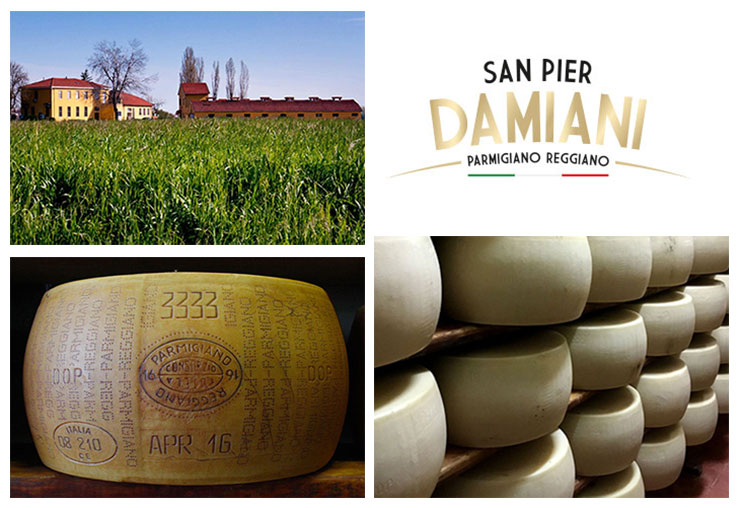 On our recent trip to Emilia Romagna, we took part in three food tours, one to visit a balsamic vinegar factory, another to see how prosciutto di Parma is made, and the third was to Caseificio San Pier Damiani to learn how Parmesan cheese is made. I booked the tour before our trip, and since we had our own car, we met our guide at the factory which is just outside of Parma. Our guide turned out to be the son of the cheesemaker, and he was so passionate about the process of making Parmigiano Reggiano, that he worked very hard to ensure we were able to see all the stages involved in making this most famous Italian cheese. San Pier Damiani is owned by a consortium of three farmers who bring their milk to the factory twice a day and have hired an expert cheese maker to turn the liquid into quality Parmesan cheese. The cheesemaker learned the craft from his Father, and he works seven days a week, every day of the year. 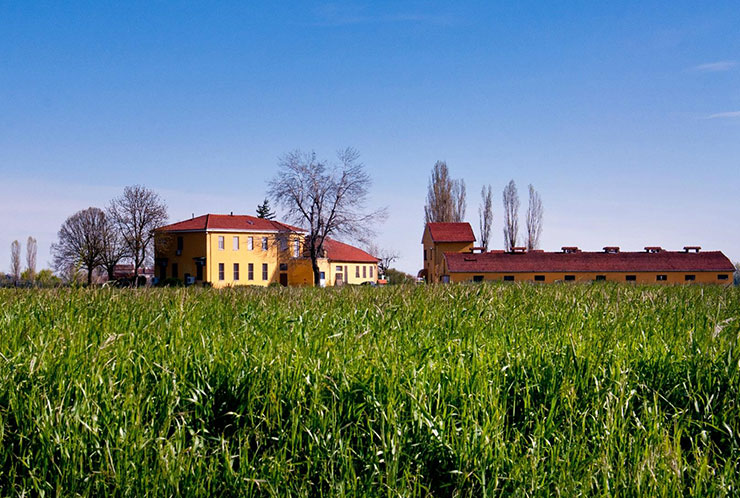 The head artisan cheese maker has just one helper to make the cheese, and the wife of the cheesemaker helps by separating the milk as it arrives at the dairy. The poor cheese maker works so hard, he hasn’t taken a day off in over twenty years! The tour was very informative and gave us a whole new appreciation for Parmigiano Reggiano, also known as the King of cheese. Following the tour, we enjoyed a cheese tasting where we were able to compare several different ages of Parmesan. I was surprised to find that I actually preferred the younger, twelve-month-old cheese as I found the older cheese to be more grainy than I liked.

Parmigiano-Reggiano is produced exclusively in the provinces of Parma, Reggio Emilia, Modena, and parts of the regions of Mantua and Bologna, on the plains, hills, and mountains enclosed between the rivers Po and Reno. It is said that the climate of this area provides the ultimate environment and conditions that produce the best quality milk from the cows used to produce Parmesan. The cheese must be made and aged following strict guidelines by the Consortium, who are officially assigned the tasks of tagging the cheese after it has been inspected and found that it has made by following the specification for the PDO (Protected Designation of Origin).

Parmigiano-Reggiano is made from unpasteurized cows milk. The starting ingredient is whole milk. After resting all night in large vats, the milk from the previous evening’s milking is mixed with the morning’s milk as soon as it has arrived from the barns in the traditional copper vats. To this, they add calf rennet and whey, rich in natural milk enzymes obtained from the previous day’s processing. The milk is heated until it reaches the right temperature of around 30°C.

Soon after adding the rennet the milk coagulates in about ten minutes or so. When the cheesemaker judges that the mass has reached the ideal consistency, he breaks up the curd that has been made into tiny granules using an ancient tool called the “spino” (a type of very large whisk). This is when the mixture is heated, to get a cooking temperature of 55°C, which causes the early stage cheese to sink to the bottom of the vat forming a single mass. 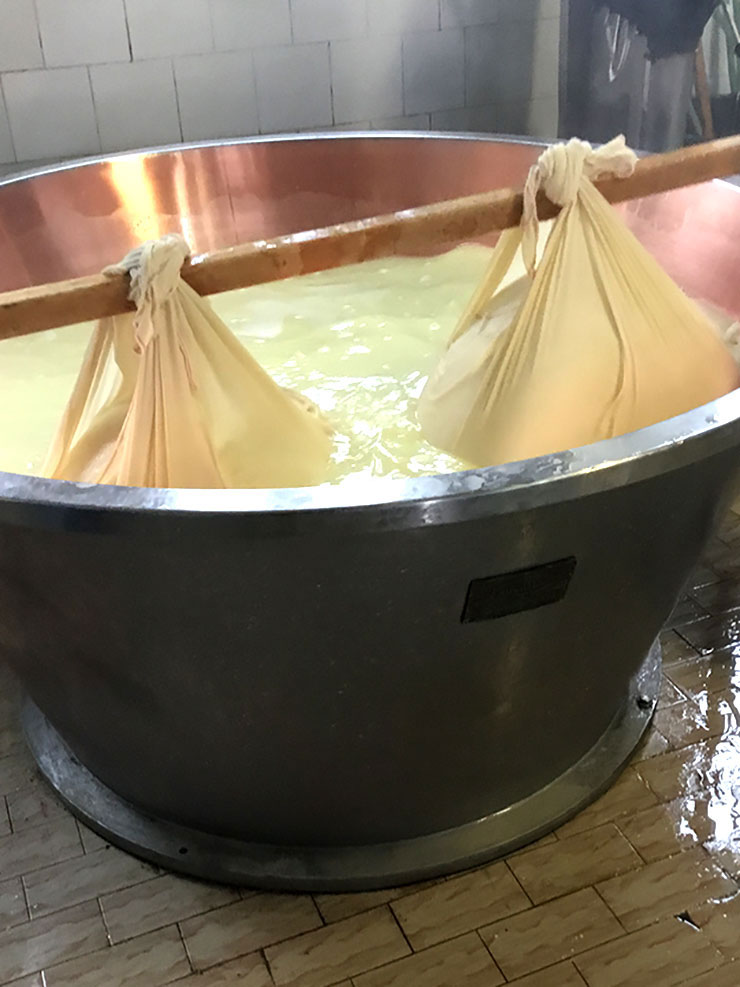 After a little less than an hour, the cheesemaker gathers the cheesy mass and divides it into two parts called the “twins”, which are patted together and turned into a muslin sheet. The twins are left hanging on a pole across the vat and are then transferred into the “fascera” or mold, which will give the cheese its final wheel shape. Each wheel is now marked with an individually numbered plate, which will clearly identify that specific round of cheese. The wheel gets its marking that shows the name “Parmigiano-Reggiano”, the month and year of production, and the number of the specific dairy. Space is left for the Consortium’s brand mark, which will be put on after 12 months when an expert inspects it using a hammer.

When the fresh Parmigiano Reggiano has begun to firm up and has taken on its characteristic wheel shape, the next stage is the salting process, where the wheels are immersed in brine in unique bathtubs to get them to absorb the salt entirely naturally. This process lasts around a month.

The wheels are left to rest on wooden tables for varying times depending on the maturation, which ranges from 12 to over 50 months. The younger, clear-colored cheese dries out, and over time it ages and forms a darker-colored rind.

During the aging process, the wheels of Parmigiano Reggiano are rotated and brushed regularly, and after 12 months have passed, they are inspected by the Consortium. With firm hammer blows, they assess whether or not there are cavities or defects within the wheels. This ancient procedure is called “beating”, and only an expert technician can “listen to” dozens of wheels in the space of an hour. Once all the inspections have been passed, each wheel receives the heat-applied brand of the Parmigiano-Reggiano Consortium that certifies the product’s complete compliance with the production regulations. 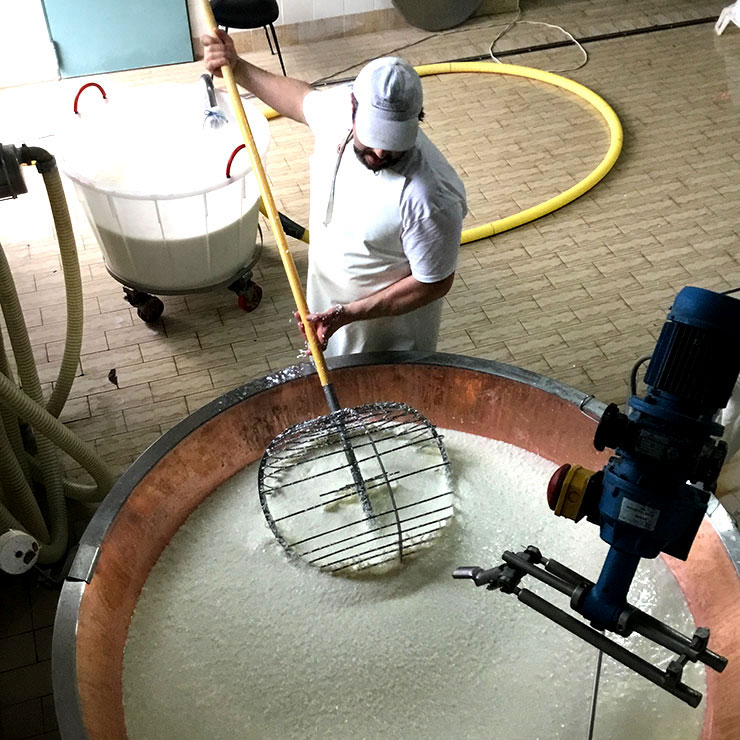 Mixing The Whey Into The New Milk 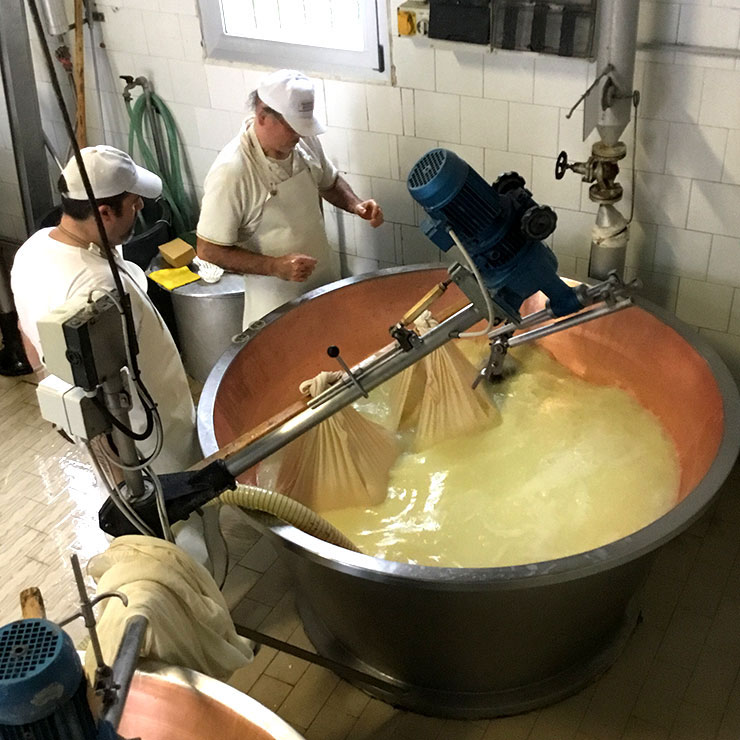 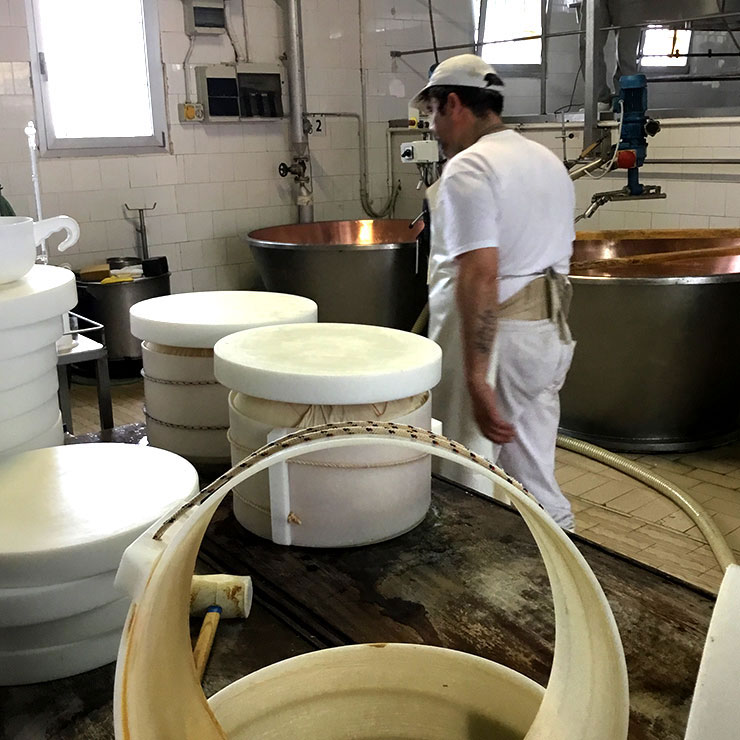 Placing The Cheese Into Forms To Produce The Traditional Wheel Shape 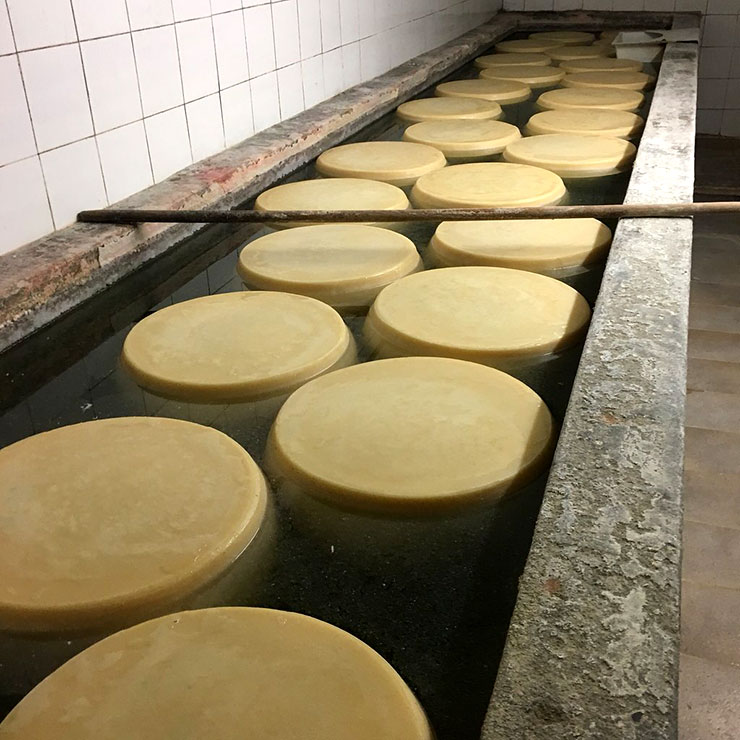 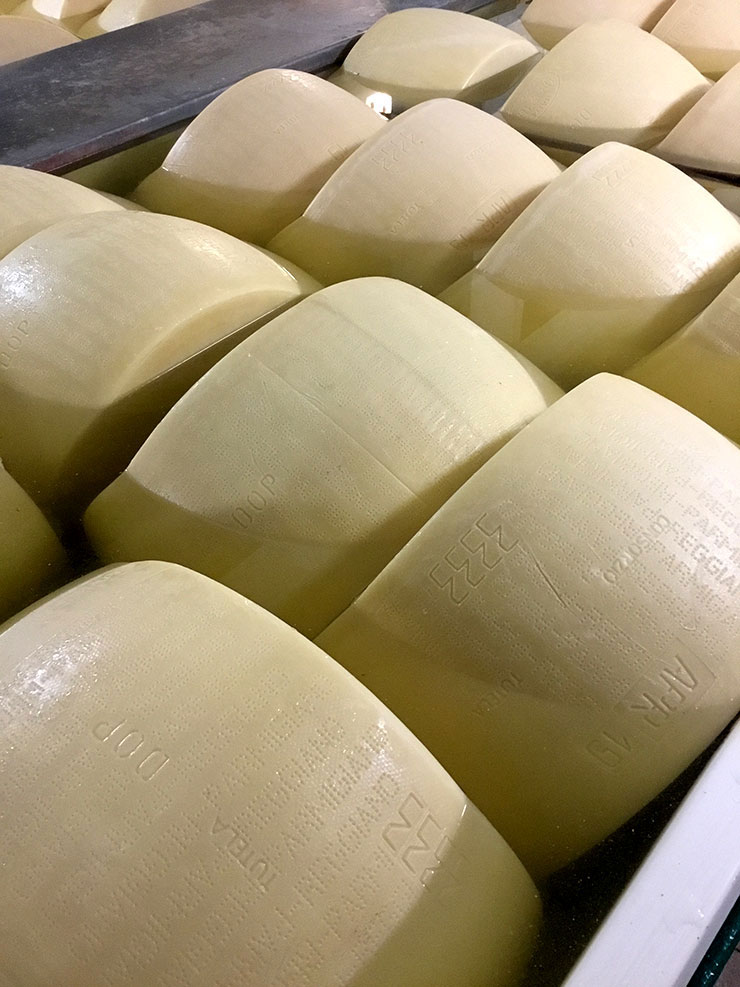 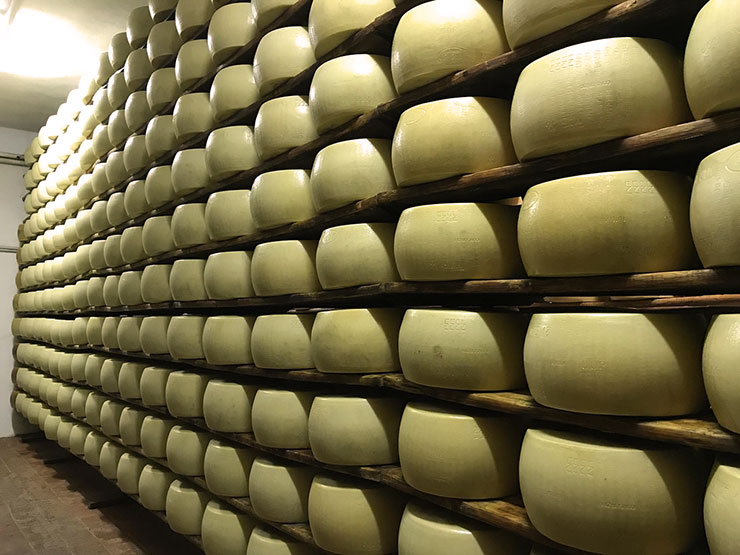 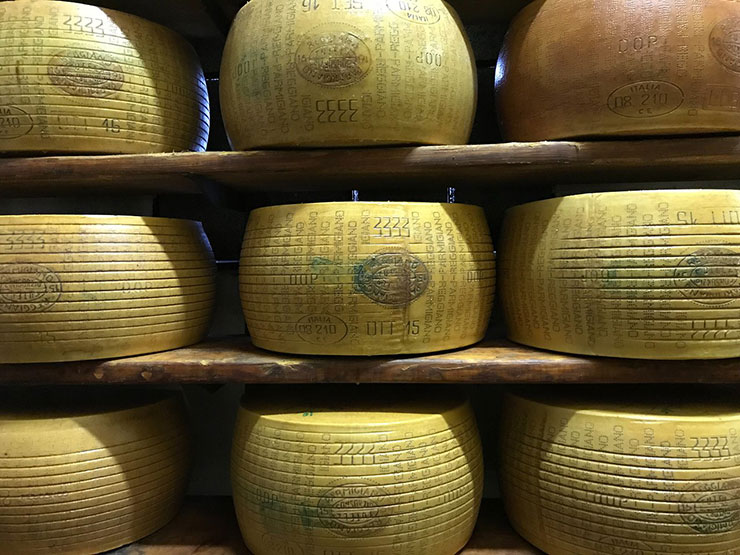 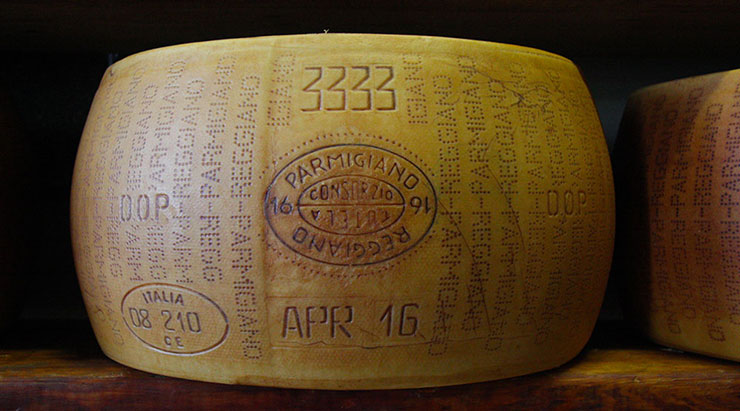 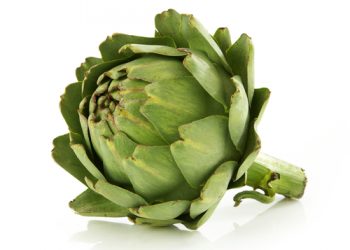 The Mysteries Of The Artichoke Unveiled 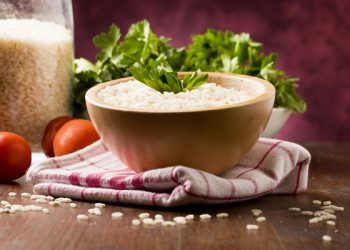 How To Make Almost No Stir Risotto 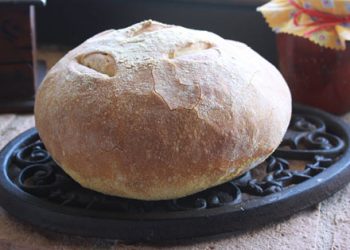 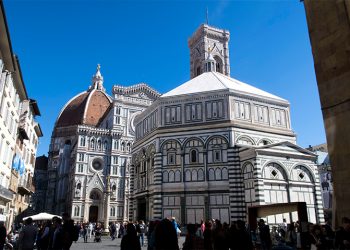 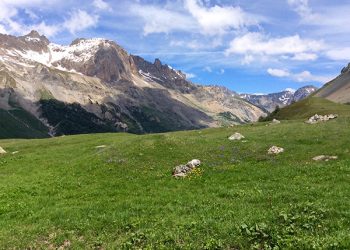