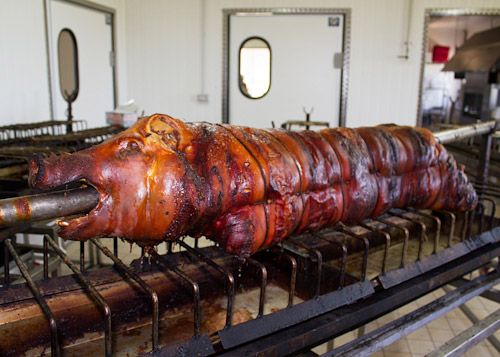 Porchetta is a savory, fatty, and moist boneless pork roast born of a rich Italian culinary tradition. Fully grown pigs weighing in at around 120 kg (250 lbs) are gutted, deboned, and stuffed with various seasonings that may include garlic, rosemary, fennel, and other herbs, as well as the liver and offal. These pigs are traditionally then slow roasted for as many as 6 hours on a spit over a wood burning oven which produces the typical moist meat and crisp skin. Porchetta is in fact of such importance, particularly in central Italy, that it was selected by the Italian Ministero delle Politiche Agricole, Alimentari e Forestali as a “prodotto agroalimentare traditional”, or a “traditional agricultural-alimentary product”, one of a list of traditional Italian foods held to have cultural relevance.

Porchetta, which obviously comes from the word porco, or pork, is traditional Italian Italian street food at its best, and is very rare found in a restaurant. Porchetta is best eaten simply sliced on fresh bread or crusty buns, or sliced on it’s own with a nice salad and glass of red wine. Porchetta is said to have originated in Lazio, and its history dates back to the Roman Empire. This is known because its processing methods are even mentioned in some works by scholars and artists as far back as 400 BC. Porchetta was even said to be the favorite dish of Emperor Nero, who was very famous for his refined palate. As far back as Roman times, the preparation and seasoning of the pig, including slow roasting it on a spit over a wood burning fire has remained the same as today. Unfortunately though, for the sake of convenience, many porchetta producers today are switching to gas ovens which really do not give the porchetta that unique flavor, and amazing crisp skin born from the wood fire.

Although we lived in Italy for 8 years back in the 1990’s, we really never paid too much attention to porchetta at the time. In Milano where we lived, there was always a porchetta truck at street markets, or at sporting events, but I think I could count on one hand how many times I tasted a porchetta panini. It simply was not that memorable at that time and place. Since we moved to Umbria however, where pork is king, we see porchetta trucks wherever we go, and it is difficult not to appreciate the effort that goes into producing really great porchetta. At the large market in Perugia each Saturday, you may see as many as 6 different porchetta trucks, but only 2 or 3 will have folks lined up in front because Umbrian folks know who sells the really good product. Porchetta is so beloved here in Umbria that there are many festivals held throughout the summer in its honor, including Porchettiamo in San Terenziano held each year.

When we first moved to Umbria we spent one very cold and rainy winter here and one of the ways we made life bearable was to indulge in a delicious porchetta panini, and we indulged a LOT. It really is embarrassing to look back to those months and think about how many porchetta paninis we really ate, but I think we tried at least half of the producers in Umbria. Time and time again as we tasted one panini after another, we always said that the porchetta from Antica Salumeria Granieri Amato was simply the best. It had the best flavor, great crisp skin, and the perfect combination of seasonings. We have learned to limit our porchetta consumption to once a week when we treat ourselves to one panini each from our favorite producer at the market in Deruta. Over the past couple of years, we have gotten to know this porchetta producing family and were excited when they invited us to come visit their shop to see how porchetta is actually made. Read more about our winter of “porchetta experimentation” in my post Perfect Porchetta.

Antica Salumeria Granieri Amato goes back as far as 1916 and in fact now has had four generations producing porchetta and traditional cured meats. We went over to their factory one morning last week to observe the entire process from pig to porchetta. The factory was as clean as an operating room, and we were taken step by step through the process of creating the perfect porchetta. The family chooses their pigs themselves, but has a butcher remove the insides for them before they arrive at the shop. The pigs are all stamped with a number and are tested to ensure they carry no diseases before they are butchered.
The family turns 15 to 20 pigs into porchetta each week, making some to order for folks, as well as selling some of the porchetta themselves from their truck. The pigs weigh in at about 120 kg when they arrive, which ends up to about 90kg once the bones are removed. Apart from the bones, as much of the pig as possible is used, and they even clean and roast the feet (zampone) and tripe to be sold as well. Although I have never tasted roasted pig feet myself, we were told they are a specialty in our area, and that people drive from all over to buy the roasted zampone.

A Warning: I am posting step by step photos of the process used to create porchetta from start to finish. For those who may be squeamish or uncomfortable with these type of photos you may not want to view them. I feel however it is important to know where your food comes from and what is done to it before it arrives on your table, and since porchetta is such a beloved product here in central Italy I wanted to share the process. 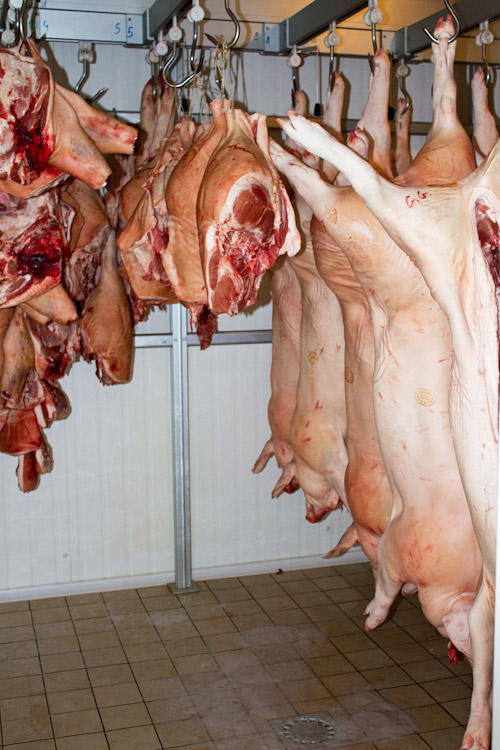 The refrigerated locker where the butchered pigs are stored. 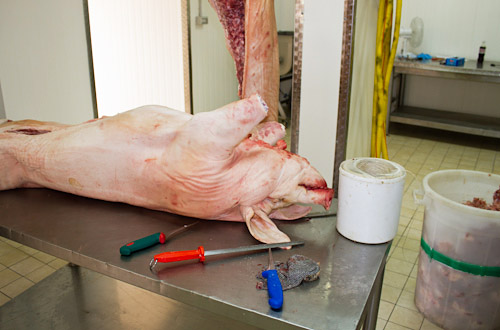 The deboning table. The spine, ribs, and leg bones are removed within minutes after years of practice. 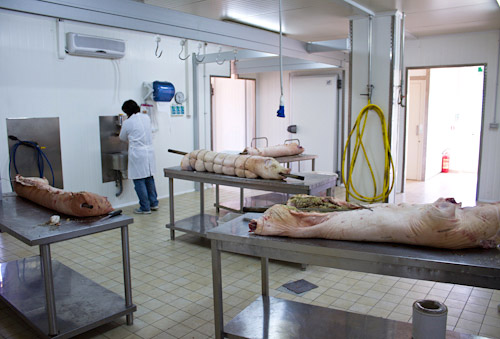 The prep room where the pigs are deboned, stuffed, tied and prepared for roasting. 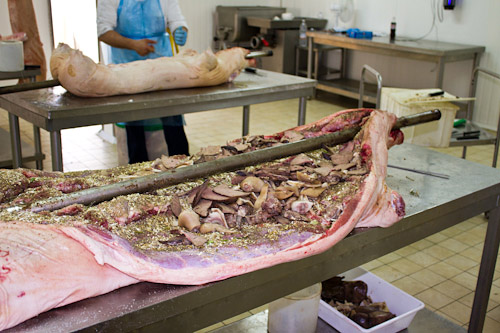 A whole pig stuffed with seasonings and liver waiting to be rolled & tied. 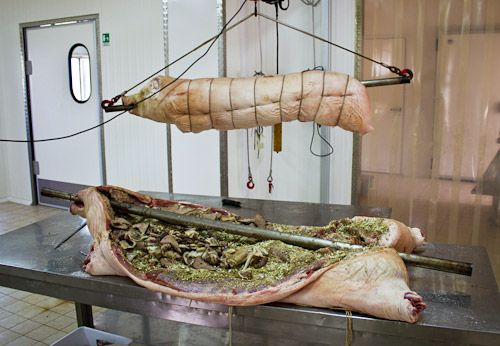 The rolled & tied pigs are attached to a pulley to be lifted onto roasting racks. 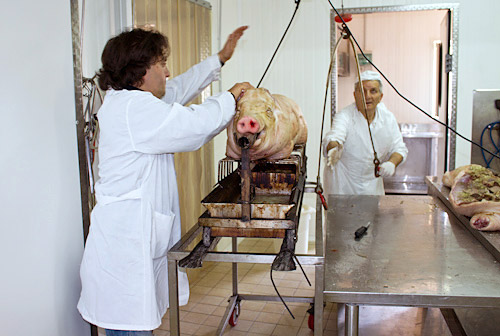 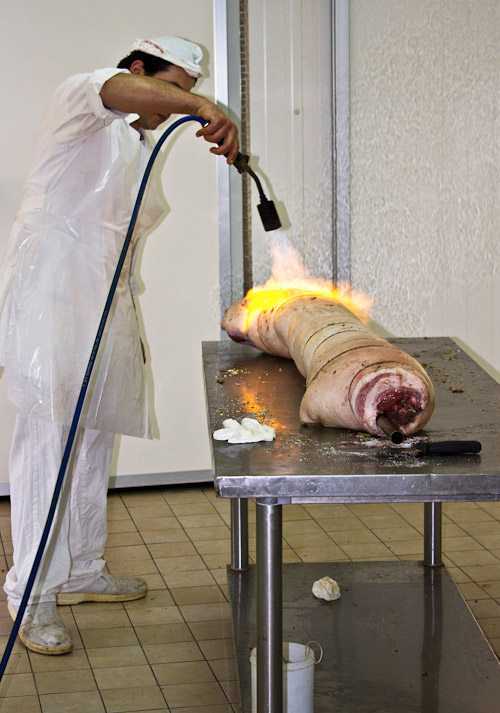 Pellegrino completes the final stage of prepping is to burn off any residual hair. 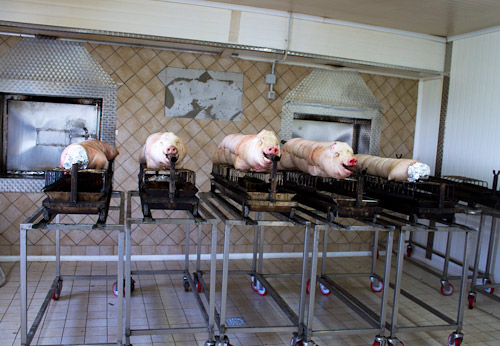 Three whole pigs and two half are lined up and ready to be put into the oven.
Each of the two ovens holds 5 pigs at a time. 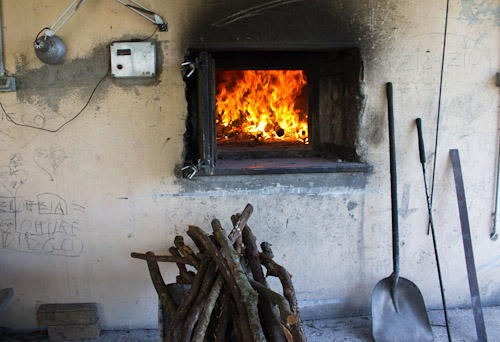 The oven is lighted and fed outdoors until it has reached the proper temperature.
The interior of the oven is made from volcanic bricks. 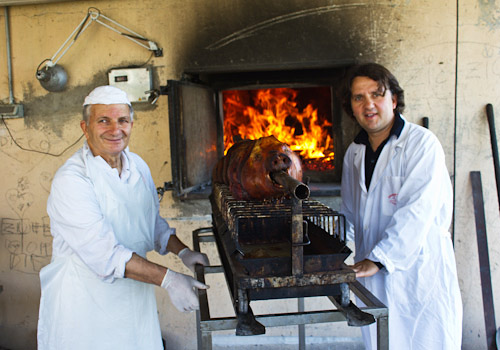 Giovanni & Alessandro with one roasted porchetta. 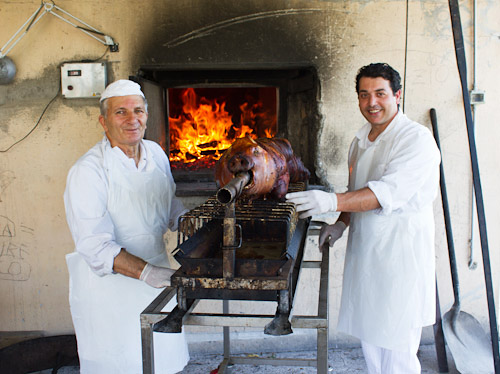 Roasting the porchetta in the summer heat is not an easy task!
Giovanni & Pellegrino admire the finished product. 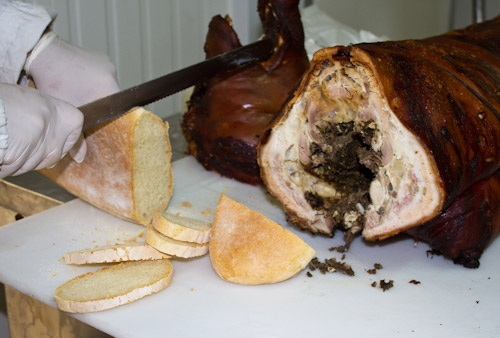 And we get to taste the porchetta. DELICIOUS! 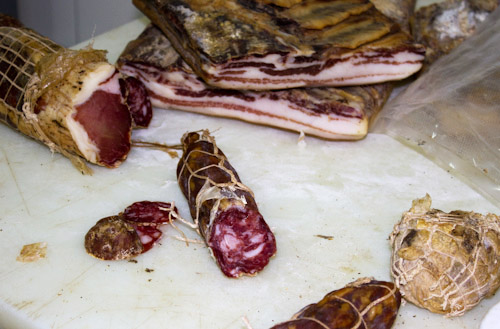 The family Granieri is also famous for their cured pork products which we also got to taste. 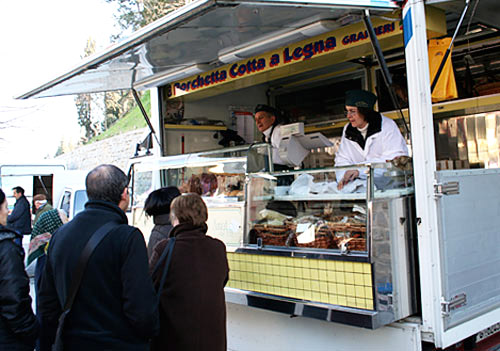 The Granieri family porchetta truck at the Deruta market. 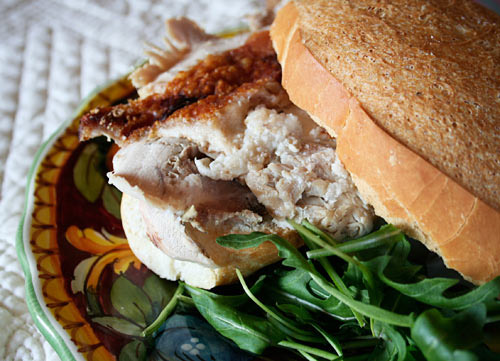 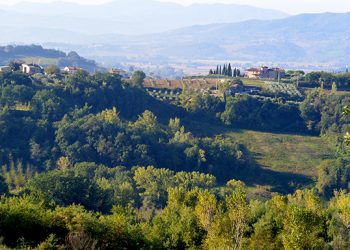 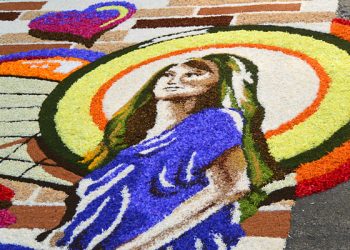 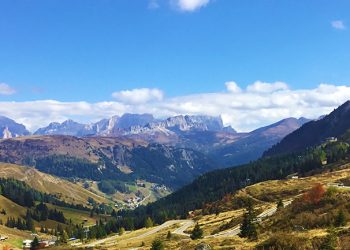