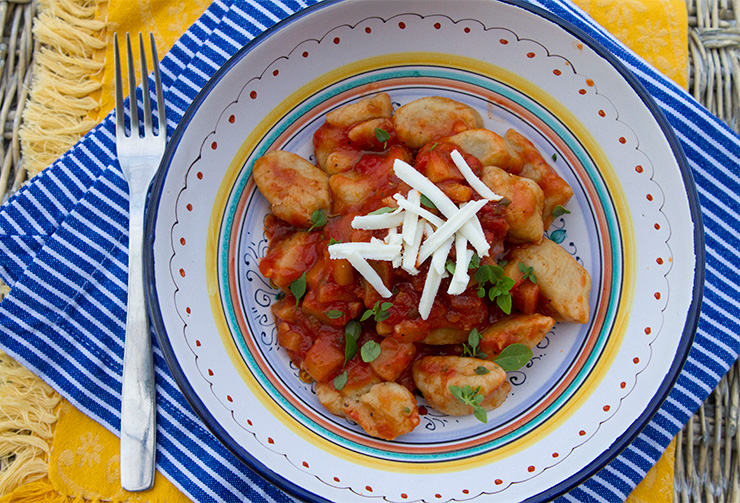 Since that very first bite of my Mother-In-Law’s wonderful potato gnocchi over forty years ago, I have had a love affair with gnocchi. A well-made gnocchi should be delicate enough to be described as tender, yet sturdy enough to hold its own when combined with the sauce. Gnocchi are dumplings, and can be made of almost any ingredients that can be formed into a dough. Gnocchi, (pronounced NYOK-ee) are made in most regions in Italy, although they are often made with different ingredients in each. Being a gnocchi lover means that I tend to be a little hypercritical of the quality of any gnocchi I am served. Although my first instinct when dining out is to choose gnocchi if it is on the menu, I have learned that doing so in North America can be very disappointing. I do often order gnocchi when dining out in Italy however and am usually very happy with my dish. 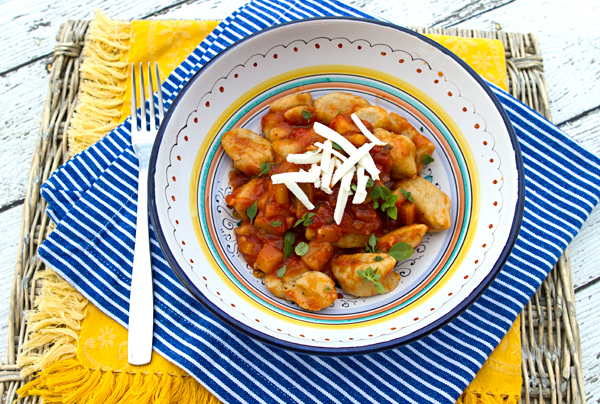 The perfect gnocchi for me are light pillows of goodness, not gummy or chewy lumps that are often over sauced. I usually prefer to make ricotta gnocchi at home simply because they are quicker than potato gnocchi (you do not have to cook the potatoes), and I find ricotta gnocchi are usually lighter in texture. When I came across a recipe for gnocchi that included both eggplant and potatoes I was so intrigued that I simply had to try it. I will preface this recipe right at the start to warn you that if you do not care for eggplant than this recipe probably isn’t for you. I love eggplant myself, so I decided to pair my eggplant gnocchi with a chunky eggplant sauce. Because this sauce made me think of Pasta all Norma, I decided to top my gnocchi with shredded ricotta salata cheese before serving but feel free to use grated Parmesan or Pecorino Romano if you prefer.

Gnocchi can be made with a variety of ingredients, and I have made them with sweet potatoes, butternut squash, and spinach. Eggplant was not something I ever would have thought of using for making gnocchi however because it simply doesn’t have a starchy texture. Mixed with potatoes though, it does work, and although the eggplant flavor is very subtle, you can taste the difference from the usual potato gnocchi. If you have never made gnocchi before, you may find this recipe a little tricky. Even though I added the step to drain the pureed eggplant pulp, the dough was rather wet and therefore, a little loose to handle. I was concerned enough to do a test, and cooked a few gnocchi before I added any additional flour, and found that even though they were quite soft, they cooked up beautifully. When making gnocchi with potatoes, I prefer to bake them rather than boil them to keep them dry. Baking rather than boiling reduces the amount of liquid in the riced potatoes requiring less flour and therefore creating a lighter finished product. Baking potatoes, or Russet potatoes are best for making gnocchi, but unfortunately, all I could find was the Italian equivalent of the Yukon Gold variety. Because the gnocchi were so soft, they were not perfectly shaped once they were cooked, but I find that rustic look appealing and shows that the gnocchi are handmade.

If you are not familiar with making gnocchi, or simply would like a little reminder, you can read my post How To Make Potato Gnocchi Step by Step .

The amount of flour needed for the recipe depends on the moisture content of the other ingredients. The eggplant should be drained of excess liquid in this recipe.

Only add three quarters of the amount of flour the recipe calls for initially. The less flour you use the lighter the gnocchi you can achieve.

Knead your gnocchi dough only as long as it takes for the ingredients to come together into a workable dough. The longer you knead, the more flour you will use, resulting in a heavier gnocchi.

It is a good idea if you are new to gnocchi making to test your gnocchi before you prepare the whole batch. Drop a couple of gnocchi into boiling water and remove as soon as they come to the surface. If they fall apart, knead in a little more flour. If they hold up well, continue cutting the rest of your gnocchi.

To cook gnocchi, always use a large pot of boiling, salted water, and remove them as soon as they float to the surface. If you overcook gnocchi they will turn to mush.

Gnocchi don’t keep well at room temperature; so if you are not cooking them right away, place them on a lightly floured baking sheet in the refrigerator. 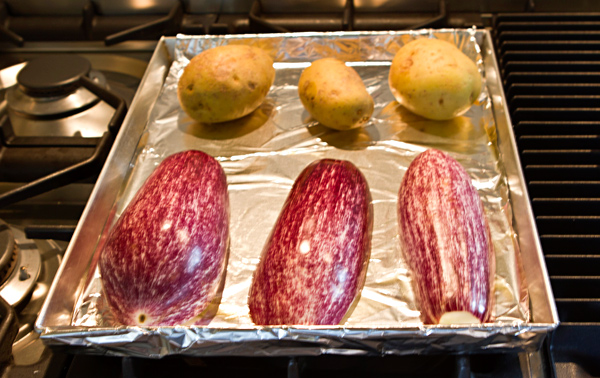 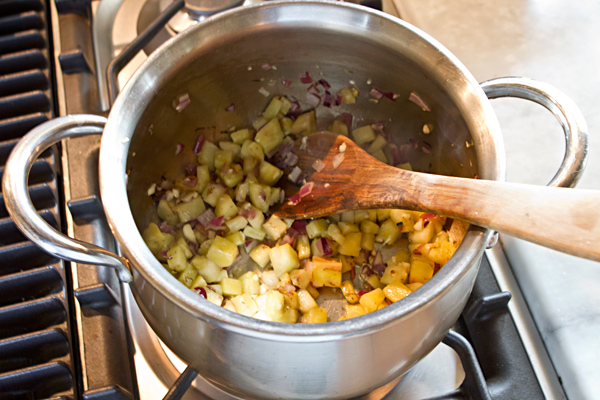 Cooking up the eggplant for the sauce. 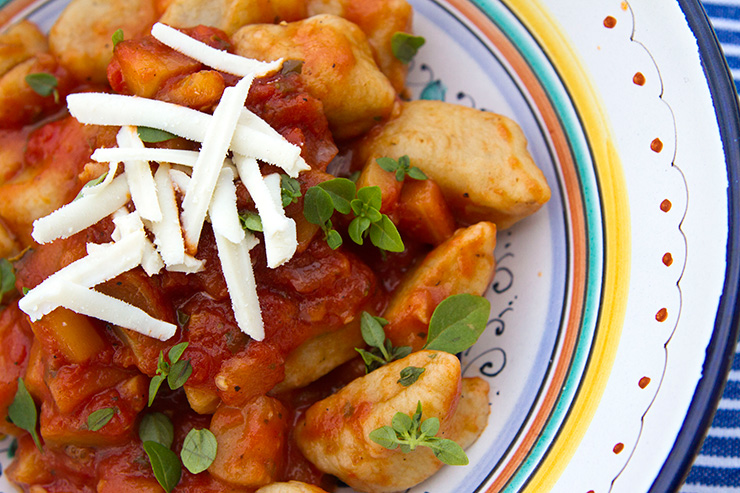 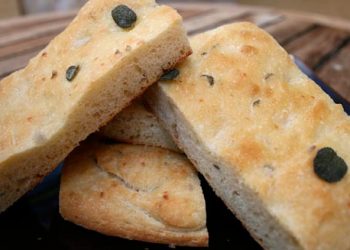 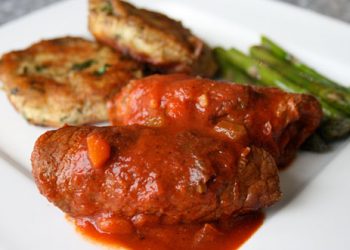 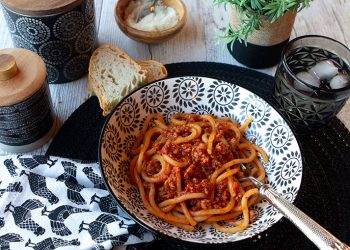