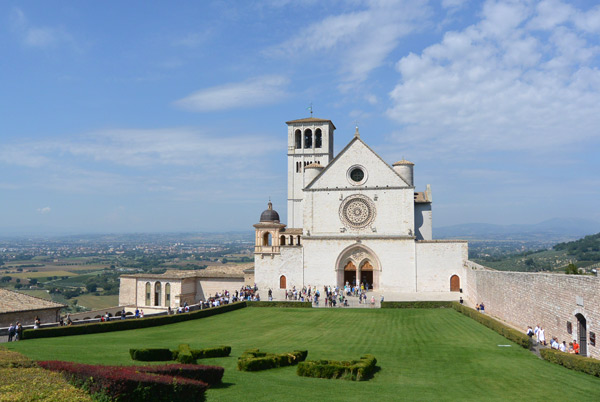 We have now been living in Umbria half time for the past six years and we are still finding new places to explore. Since we are not on vacation during our yearly six month stay, we often do not get out to enjoy the region as much as we would like. At least one day a week however, we do venture out to explore our adopted region and enjoy a leisurely lunch and day away from home. Our recent guests shared with us their experience of visiting the Bosco di San Francesco, or Saint Francis’s Forest and not having visited this part of Assisi before ourselves, we planned to do so on a recent Sunday. Assisi was bustling with tour groups and religious pilgrims when we arrived mid morning, but once we ventured into the forest it was a different experience altogether. The forest was a cool, shady oasis of solitude and natural beauty that seemed miles away from the crowded streets of the city. It is said that the goal of this spiritual route is not a message of religion or devotion, but rather an invitation to explore mankind’s relationship with nature throughout the ages. These trails follow in the footsteps of some of the area’s earliest inhabitants, including Saint Frances himself. 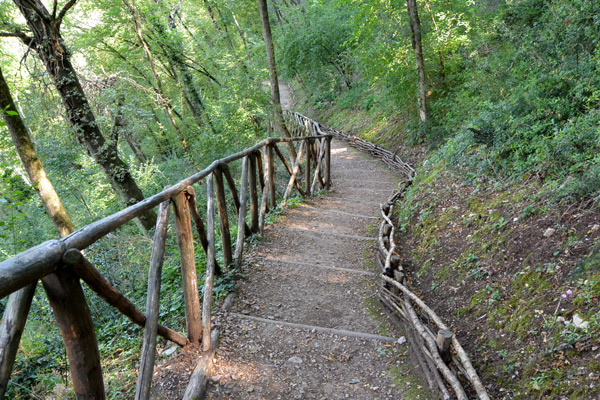 In 2011, the San Francesco Woodland, an area of about 12 acres was opened to the public and walking paths allow visitors to experience the beauty of Assisi’s forest. It took the co-operative effort of Italy’s National Heritage Trust, public administration, corporate sponsors, and many private donors to create over 3 kilometers of walking trails and to restore the 13th century Benedictine convent and mill. The paths wander the slopes of Mount Subasio behind the Basilica of Saint Francis, allowing folks to experience the beauty of the area as Saint Francis himself did. The trails are well marked, with sign posts explaining a lot of the area’s history planted along the way. The trail is a little rough at points so walking or hiking shoes are important, and although the uphill climb is a tad taxing at times, there are wooden benches placed all along the trail for folks to rest and relax and enjoy the beauty and solitude of the forest.

It is said that entrance is free, but that a donation is suggested. Basically in order to get the small guide and map of the trails, a 4 euro donation per person is expected which is certainly appropriate. There are two trails, one that is 1.5 kilometers in length and is suggested will take you 25 minutes to complete. This trail leaves just next to the Basilica of San Francesco and will take you to the beautifully restored Benedictine Santa Croce convent and visitor center. There is also Osteria Il Mulino there, which as its name suggests was restored from an old mill. During the summer, meals are served on the covered outdoor patio and it does get crowded, so reservations are requested. We enjoyed a lovely leisurely lunch at Il Mulino, and although the menu is not extensive, it does serve typical Umbrian cuisine that is seasonal, simply prepared and very tasty. The second trail is 2 kilometers in length, and it is suggested it will take 40 minutes to complete. This trail leaves from the visitor’s center at Santa Croce to Terzo Paradiso, then looping back to the visitor’s center. This trail follows the Tescio River which is completely dried up at this time. Within the Terzo Paradiso is a 14th century tower that can be climbed using an external staircase. It is best to allow plenty of time if you plan on walking both trails and to stop for lunch at Il Mulino in order to fully grasp the spiritual beauty of this experience. We entered the trail at about 11am and after completing both trails and enjoying a relaxing lunch we left the woodlands at about 3:30pm. 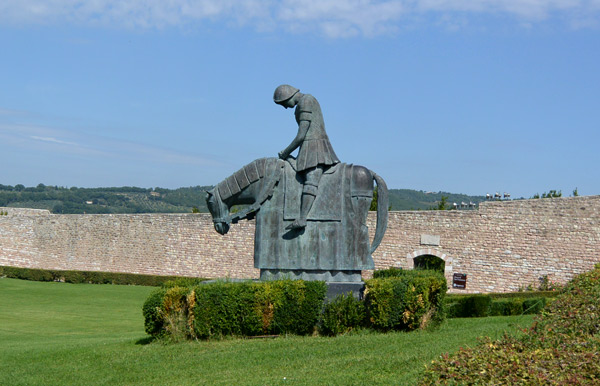 Statue on the lawns of the basilica with the door to the Bosco di San Francesco behind.

Meandering down the trail to Santa Croce. 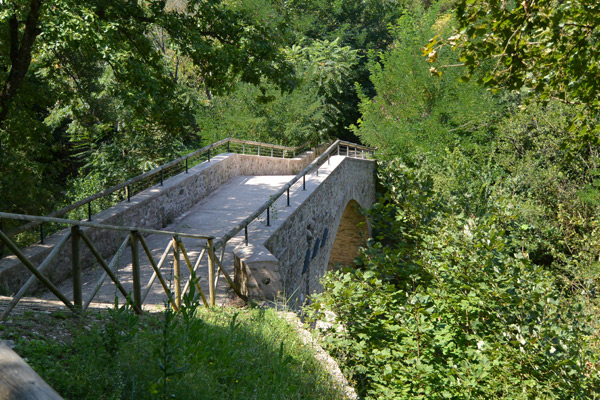 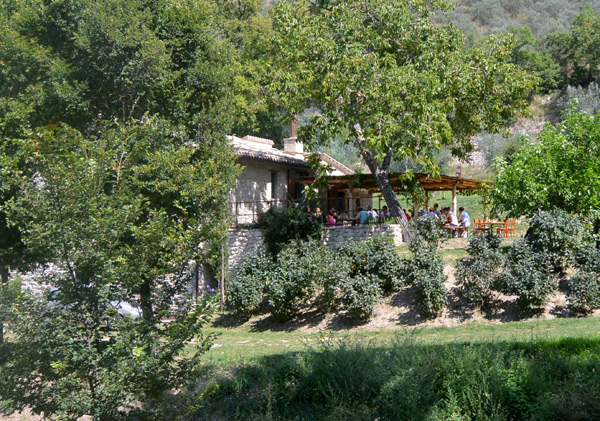 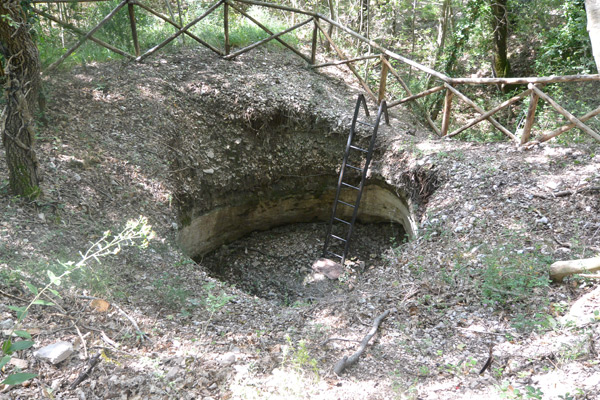 Ancient kiln used to make limestone blocks used in the buildings throughout Assisi. 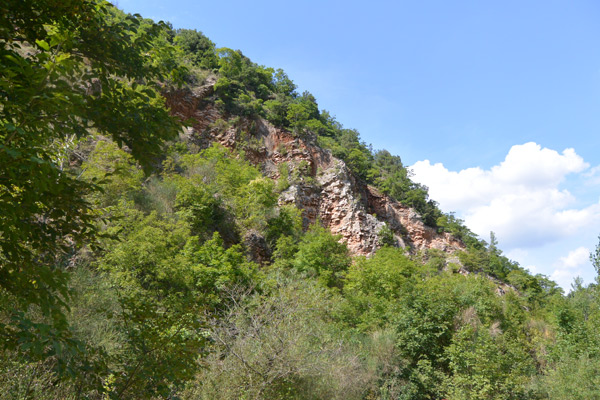 Two pasta dishes enjoyed at Osteria Il Mulino. Pasta with porcini mushrooms and truffles at left, and pasta stuffed with buffalo mozzarella and served with fresh tomato sauce on right. 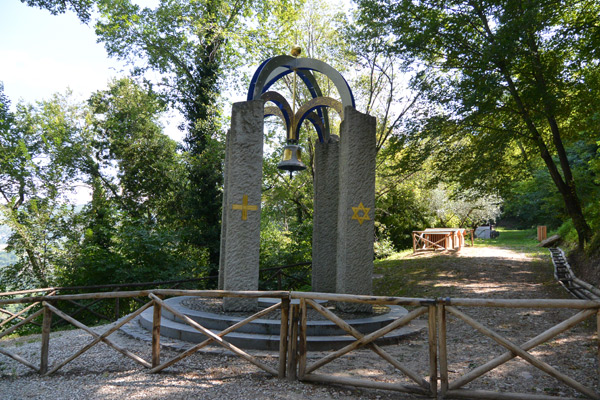 Peace Bell found along the trail. 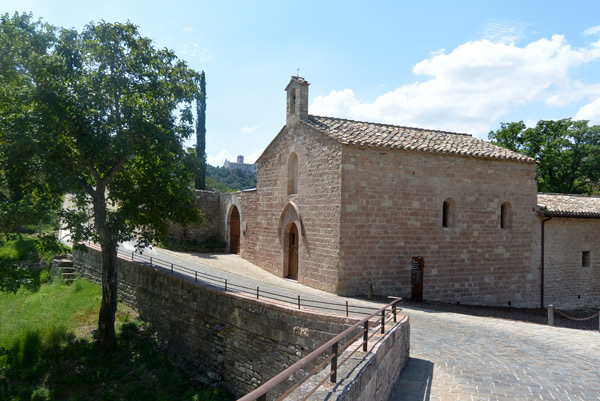 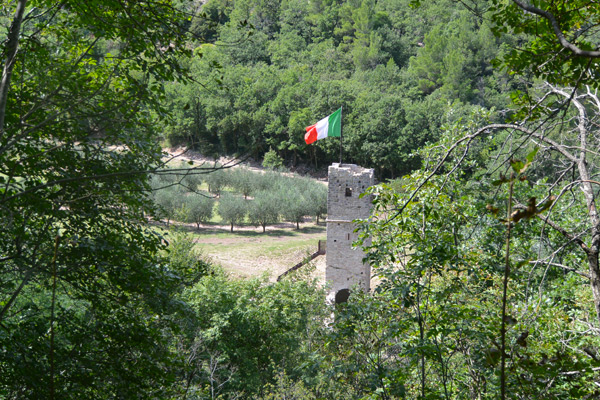 The tower seen at Terzo Paradiso. 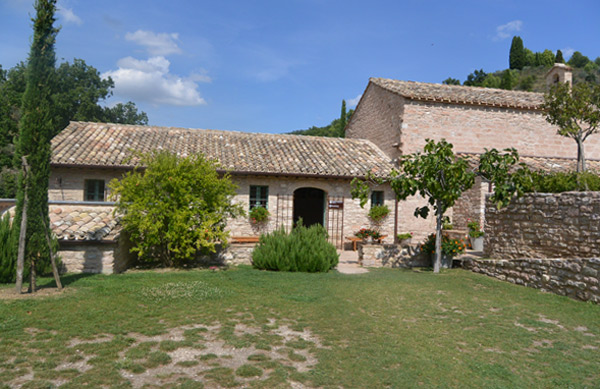 The visitor center at Santa Croce. 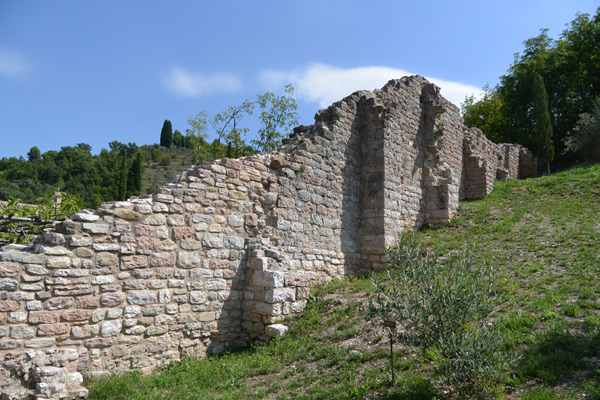 Hours of Opening:
The San Francesco Woodland is open to visitors from April to September 10:00 am – 7:00 pm and October to March 10:00 am — 4:00 pm (the last visit must begin an hour before closing time). Closed Mondays, and the months of January and February.

Admission:
A 4 Euro Donation is “suggested”.

How To Find:
The Bosco di San Francesco is in Assisi next to the Basilica. Entry points can be accessed from the Piazza Superiore of San Francesco at the summit of the woodland. If you are facing the basilica you will see a large stone wall along the right side and a wooden door within this wall. Head through this door to access the woodlands. You can also access the trail midway from the Santa Croce Visitors’ Center in the valley below. The visitors’ center also has a small gift shop and a cafe will be added in the spring.
Bosco di San Francesco Website 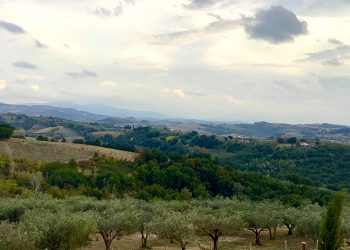